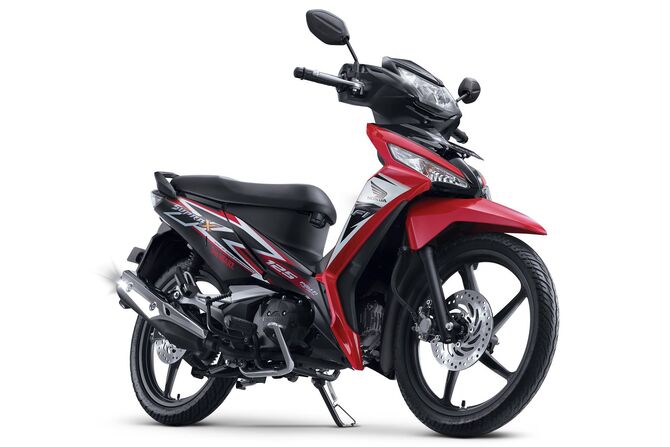 Honda Supra X is the motorcyle built in indonesia

Welcome to the Honda Wiki, the Wiki devoted to details about Honda vehicles, engines and other equipment. since the company was founded in 1948

Honda was the first Japanese automobile manufacturer to release a dedicated luxury brand, Acura, in 1986. Aside from their core automobile and motorcycle businesses, Honda also manufactures garden equipment, marine engines, personal watercraft and power generators, and other products. Since 1986, Honda has been involved with artificial intelligence/robotics research and released their ASIMO robot in 2000. They have also ventured into aerospace with the establishment of GE Honda Aero Engines in 2004 and the Honda HA-420 HondaJet, which began production in 2012. Honda has two joint-ventures in China: Dongfeng Honda and Guangqi Honda.

In 2013, Honda invested about 5.7% (US$6.8 billion) of its revenues in research and development. Also in 2013, Honda became the first Japanese automaker to be a net exporter from the United States, exporting 108,705 Honda and Acura models, while importing only 88,357.

Throughout his life, Honda's founder, Soichiro Honda, had an interest in automobiles. He worked as a mechanic at the Art Shokai garage, where he tuned cars and entered them in races. In 1937, with financing from his acquaintance Kato Shichirō, Honda founded Tōkai Seiki (Eastern Sea Precision Machine Company) to make piston rings working out of the Art Shokai garage. After initial failures, Tōkai Seiki won a contract to supply piston rings to Toyota, but lost the contract due to the poor quality of their products. After attending engineering school without graduating, and visiting factories around Japan to better understand Toyota's quality control processes, by 1941 Honda was able to mass-produce piston rings acceptable to Toyota, using an automated process that could employ even unskilled wartime laborers.

Tōkai Seiki was placed under the control of the Ministry of Commerce and Industry (called the Ministry of Munitions after 1943) at the start of World War II, and Soichiro Honda was demoted from president to senior managing director after Toyota took a 40% stake in the company. Honda also aided the war effort by assisting other companies in automating the production of military aircraft propellers. The relationships Honda cultivated with personnel at Toyota, Nakajima Aircraft Company and the Imperial Japanese Navy would be instrumental in the postwar period. A US B-29 bomber attack destroyed Tōkai Seiki's Yamashita plant in 1944, and the Itawa plant collapsed on 13 January 1945 Mikawa earthquake. Soichiro Honda sold the salvageable remains of the company to Toyota after the war for ¥450,000 and used the proceeds to found the Honda Technical Research Institute in October 1946.

With a staff of 12 men working in a 16 m2 (170 sq ft) shack, they built and sold improvised motorized bicycles, using a supply of 500 two-stroke 50 cc Tohatsu war surplus radio generator engines. When the engines ran out, Honda began building their own copy of the Tohatsu engine, and supplying these to customers to attach to their bicycles. This was the Honda A-Type, nicknamed the Bata Bata for the sound the engine made. In 1949, the Honda Technical Research Institute was liquidated for ¥1,000,000, or about US$5,000 today; these funds were used to incorporate Honda Motor Co., Ltd. At about the same time Honda hired engineer Kihachiro Kawashima, and Takeo Fujisawa who provided indispensable business and marketing expertise to complement Soichiro Honda's technical bent. The close partnership between Soichiro Honda and Fujisawa lasted until they stepped down together in October 1973.

The first complete motorcycle, with both the frame and engine made by Honda, was the 1949 D-Type, the first Honda to go by the name Dream. In 1961, Honda achieved its first Grand Prix victories and World Championships in 125cc and 250cc. Honda Motor Company grew in a short time to become the world's largest manufacturer of motorcycles by 1964.[citation needed]

Over the next few decades, Honda worked to expand its product line and expanded operations and exports to numerous countries around the world. In 1986, Honda introduced the successful Acura brand to the American market in an attempt to gain ground in the luxury vehicle market. The year 1991 saw the introduction of the Honda NSX supercar, the first all-aluminum monocoque vehicle that incorporated a mid-engine V6 with variable-valve timing.

CEO Tadashi Kume was succeeded by Nobuhiko Kawamoto in 1990. Kawamoto was selected over Shoichiro Irimajiri, who oversaw the successful establishment of Honda of America Manufacturing, Inc. in Marysville, Ohio. Irimajiri and Kawamoto shared a friendly rivalry within Honda; owing to health issues, Irimajiri would resign in 1992.

Following the death of Soichiro Honda and the departure of Irimajiri, Honda found itself quickly being outpaced in product development by other Japanese automakers and was caught off-guard by the truck and sport utility vehicle boom of the 1990s, all which took a toll on the profitability of the company. Japanese media reported in 1992 and 1993 that Honda was at serious risk of an unwanted and hostile takeover by Mitsubishi Motors, which at the time was a larger automaker by volume and was flush with profits from its successful Pajero and Diamante models.

Kawamoto acted quickly to change Honda's corporate culture, rushing through market-driven product development that resulted in recreational vehicles such as the first-generation Odyssey and the CR-V, and a refocusing away from some of the numerous sedans and coupes that were popular with the company's engineers but not with the buying public. The most shocking change to Honda came when Kawamoto ended the company's successful participation in Formula One after the 1992 season, citing costs in light of the takeover threat from Mitsubishi as well as the desire to create a more environmentally friendly company image.

The Honda Aircraft Company as established in 2006 as a wholly owned subsidiary to manufacture and sell the HondaJet family of aircraft. The first deliveries to customers began in December 2015.

On 23 February 2015, Honda announced that CEO and President Takanobu Ito would step down and be replaced by Takahiro Hachigo by June; additional retirements by senior managers and directors were expected.

In October 2019, Honda was reported to be in talks with Hitachi to merge the two companies' car parts businesses, creating a components supplier with almost $17 billion in annual sales.

In January 2020, Honda announced that it would be withdrawing employees working in the city of Wuhan, Hubei, China due to the COVID-19 pandemic. Due to the global spread of the virus, Honda became the first major automaker with operations in the US to suspend production in its factories on March 23, 2020. It resumed automobile, engine and transmission production at its US plants on May 11, 2020.

Honda and General Motors announced in September 2020 a North American alliance to begin in 2021. According to The Detroit Free Press, "The proposed alliance will include sharing a range of vehicles, to be sold under each company’s distinct brands, as well as cooperation in purchasing, research and development, and connected services."

Honda is headquartered in Minato, Tokyo, Japan. Their shares trade on the Tokyo Stock Exchange and the New York Stock Exchange, as well as exchanges in Osaka, Nagoya, Sapporo, Kyoto, Fukuoka, London, Paris, and Switzerland.

The company has assembly plants around the globe. These plants are located in China, the United States, Pakistan, Canada, England, Japan, Belgium, Brazil, México, New Zealand, Malaysia, Indonesia, India, Philippines, Thailand, Vietnam, Turkey, Taiwan, Perú and Argentina. As of July 2010, 89 percent of Honda and Acura vehicles sold in the United States were built in North American plants, up from 82.2 percent a year earlier. This shields profits from the yen's advance to a 15-year high against the dollar.

American Honda Motor Company is based in Torrance, California. Honda Racing Corporation (HRC) is Honda's motorcycle racing division. Honda Canada Inc. is headquartered in Markham, Ontario, it was originally planned to be located in Richmond Hill, Ontario, but delays led them to look elsewhere. Their manufacturing division, Honda of Canada Manufacturing, is based in Alliston, Ontario. Honda has also created joint ventures around the world, such as Honda Siel Cars and Hero Honda Motorcycles in India, Guangzhou Honda and Dongfeng Honda in China, Boon Siew Honda in Malaysia and Honda Atlas in Pakistan. The company also runs a business innovation initiative called Honda Xcelerator, in order to build relationships with innovators, partner with Silicon Valley startups and entrepreneurs, and help other companies work on prototypes. Xcelerator had worked with reportedly 40 companies as of January 2019. Xcelerator and a developer studio are part of the Honda Innovations group, formed in Spring 2017 and based in Mountain View, California.

Following the Japanese earthquake and tsunami in March 2011, Honda announced plans to halve production at its UK plants. The decision was made to put staff at the Swindon plant on a 2-day week until the end of May as the manufacturer struggled to source supplies from Japan. It's thought around 22,500 cars were produced during this period.

For the fiscal year 2018, Honda reported earnings of US$9.534 billion, with an annual revenue of US$138.250 billion, an increase of 6.2% over the previous fiscal cycle. Honda's shares traded at over $32 per share, and its market capitalization was valued at US$50.4 billion in October 2018.

Community content is available under CC-BY-SA unless otherwise noted.